See attached pdf below and bemidjiyouthhockey.org for more info

Join Teddy Belisle (Los Angeles Kings) and NCAA and Junior Hockey Coaches for an exciting opportunity to improve your on and off ice skills.

Hockey With the Pro's Camp

Hockey with the Pro's Camp Letter/Sign up 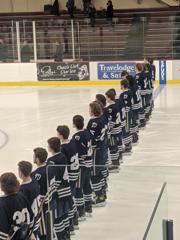 LAKELAND PUBLIC TV INTERVIEWS FOR THE START OF THE SEASON !

May 16 Choir Concert- Online Tickets Only!

BHS Spring Choir Concert will be May 16 @ 7:30pm in the Auditorium.  All ticket sales will be online, no cash sales at the door.  Buy your tickets at https://www.vancoevents.com/WLF

For the second straight season, the Bemidji High School boys hockey (8-11) team brought Moorhead (11-7-1) to the brink of elimination in the Section 8AA quarterfinals Wednesday night.

The Lumberjacks’ Wyatt Mattfield sent the game to overtime with 6:45 to play in regulation, but the Spuds struck with six seconds to play in the extra period to secure a 3-2 win.

BHS goaltender Tanner Rebischke racked up 47 saves in a standout night in net. The senior almost duplicated his 52-save performance from last season’s section quarterfinal matchup when the Jacks similarly went on the road and nearly knocked off top-seeded Moorhead.

The Bemidji High School boys hockey team will be the hottest team in the field entering into the Section 8AA Tournament.

The Lumberjacks won four games in a row to close the regular season, affording them the No. 7 seed in the bracket.

The winner will advance to play either No. 3 St. Michael-Albertville or No. 6 Brainerd in the semifinals on Saturday, March 20, at the high seed. The Section 8AA title game is set for Thursday, March 25, at the highest remaining seed.

Roseau earned the top seed and will host No. 8 Buffalo in the first round, while No. 4 Rogers and No. 5 St. Cloud are set to square off in the last quarterfinal matchup.